Guilty pleas and plea bargaining are an integral part of the federal criminal justice system.  In 2003, approximately 95 percent of federal criminal charges were resolved through guilty pleas.  That number has not significantly gone down over the years, and our own experience aligns with those numbers. Even the Supreme Court has recognized the importance of the plea bargaining process in its recent decisions, most particularly by holding that a criminal defendant has the right to effective assistance of counsel during the plea bargaining phase.

When does the plea bargaining process start? How long does it last?

The plea bargaining process can start at any time in a criminal case.

Before any charges have been filed, an individual who is under federal criminal investigation may decide that cooperation is the best course of action. In that case, the individual may have his or her attorney negotiate with the government, and sign a sealed plea agreement months or years before any formal charges are brought.  This is a fairly common occurrence in white collar cases.

If a case is not resolved during the investigation stage, and assuming that an indictment is brought, the plea bargaining process will continue during the discovery and pretrial motions stage.  During this stage, there may be frequent offers and counteroffers as the parties dig into the evidence and explore the legal and factual issues in the case.  Although prosecutors will frequently set deadlines on sequential plea offers, it is not uncommon for there to be three or four separate plea offers over the course of trial preparation.

A defendant can agree to plead guilty after trial begins.  Typically, this can happen for a number of reasons.  For example, the judge may have made certain pretrial rulings that strongly tilts the case towards one side or the other; the prosecution may have disclosed extremely important evidence shortly before trial; or the defendant may have simply had a last minute change of heart.  Finally, a defendant can even enter into a plea agreement after the jury has returned a guilty verdict.  Of course, such plea offers are extremely rare and occur only in the most unusual circumstances.  Whatever the reason, however, there is no general prohibition under the federal rules that governs when a guilty plea must be entered.

If I am innocent, why should I think about plea offers?

Even if you believe you are innocent, you should discuss the possibility of plea offers with your attorney to explore the pros and cons of pursuing plea negotiations. Prosecutors and investigating agents will continue to amass and gather evidence against the defendant over time, and potentially add new charges via superseding indictment.  Frequently, defendants change their mind over the course of time as they see new evidence emerge. Additionally, even if the defendant is set to go to trial, engaging in plea discussions with the government can often result in the defense attorney learning valuable information about the government’s case: such as key documents or witnesses that will be used against the defendant at trial. Whether or not you should explore a plea offer is a strategic decision that you should make only after close consultation with an experienced attorney.

What is the process for pleading guilty in a federal criminal case?

Generally, a guilty plea begins with a plea agreement (although a defendant can also plead guilty without any agreement, also called an “open plea”).  The plea agreement is often described as a contract between the defendant and the government. 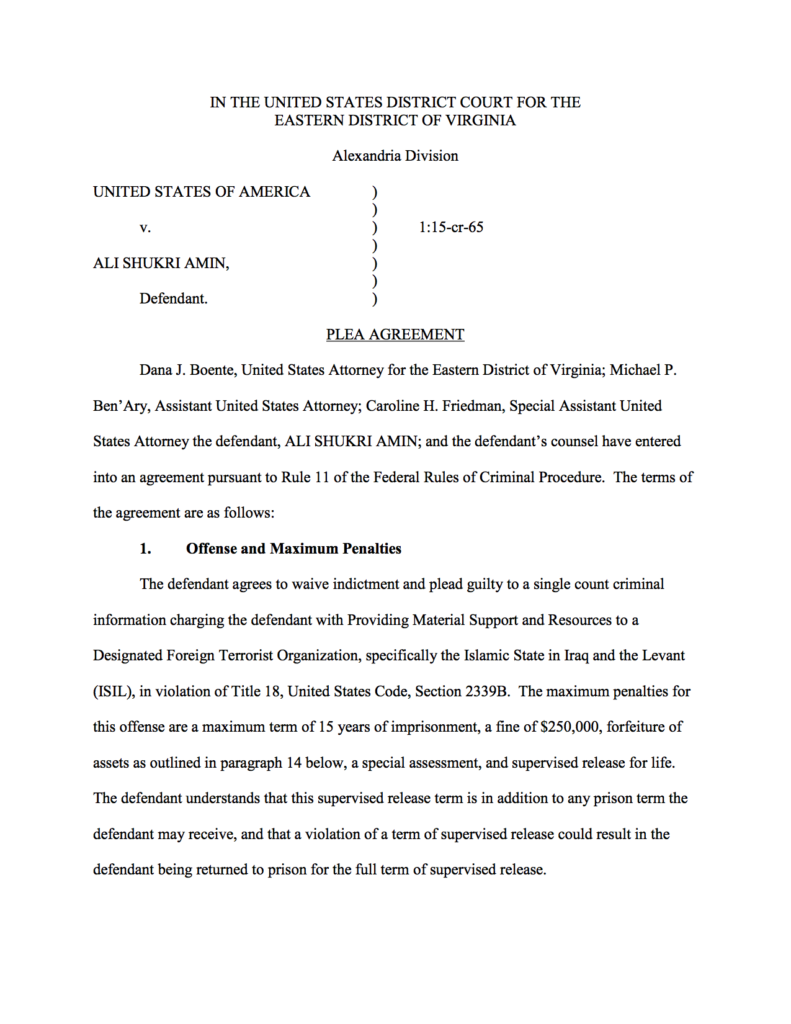 Following that description, a plea agreement can sometimes be drafted as a formal contract, such as the example above.  More often, plea agreements are simply in the form of written letters from the prosecutor to the defendant’s attorney.

Although the terms of a plea agreement will vary from case to case, federal plea agreements will generally contain at least the following provisions:

What are the different kinds of guilty pleas?

An “open plea,” sometimes also called a “straight plea,” is an informal term used by attorneys to refer to guilty pleas without a plea agreement. Unlike guilty pleas pursuant to plea agreements, open pleas do not carry any protection for the defendant against prosecution for related offenses.  Nevertheless, there are situations where “open pleas” can be the best option for a defendant.

Finally, in federal criminal cases there is a rare type of guilty plea that is informally called a “C” plea, named after Rule 11(c)(1)(C) of the Federal Rules of Criminal Procedure.  In a “C” plea, the defendant and the prosecutor agree to a specific sentence or sentencing range, and that range is binding on the court once the plea agreement is accepted by the Court.  By contrast, the vast majority of plea agreements in federal criminal cases have sentencing “recommendations” by federal prosecutors that are not binding on the court.  A “C” plea is often beneficial for the defendant, because it allows the defendant to know ahead of time exactly what punishment he will receive, and minimizes the risk of being sentenced to something he or she did not anticipate.

Can I withdraw my guilty plea once I have pleaded guilty?

Before the court accepts a plea, a defendant can withdraw his or her guilty plea at anytime and for any reason. However, such withdrawals occur rarely because the guilty plea and the court’s acceptance of that plea generally occur at the same plea hearing.

Because of the difficulty of withdrawing a guilty plea in federal court, it is paramount for a defendant to spend the time necessary to consider this matter in close consultation with his or her attorney before agreeing to enter a plea of guilty.

What happens after I plead guilty?