We are experienced Bank Fraud Defense Attorneys in Washington, DC.

On any given day, banks in the United States have trillions of dollars in deposits in their coffers.  This enormous sum of money is an attractive target for fraud.  Federal law enforcement prosecutes those who perpetrate such fraud using the Bank Fraud statute  – 18 U.S.C. § 1344 – and related laws.

In this article, we discuss the law of Bank Fraud and some important points about its practical application.

What is Bank Fraud?

At its core, bank fraud involves a scheme to defraud a financial institution, but it can come in many different types and cover a wide variety of conduct.  Here is a list of some examples of bank fraud: 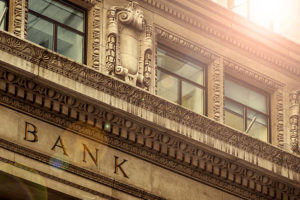 The federal bank fraud statute, 18 U.S.C. § 1344, defines bank fraud as knowingly executing or attempting to execute a scheme or artifice 1) to defraud a financial institution; or 2) to obtain any of the moneys, funds, credits, assets, securities, or other property owned by or under the custody or control of a financial institution by means of false or fraudulent pretenses, representations, or promises.  Bank fraud under this law, or its related conspiracy statute, is a felony.

Importantly, the statute applies to both bank “insiders” and “outsiders.”  Bank employees and customers can both be guilty of bank fraud, or be charged with entering into a conspiracy together to commit it.

As you can see, this broadly worded statute covers a wide sweep of conduct involving financial institutions.  As courts have interpreted this statute, you can be convicted of bank fraud even if your loan application was rejected or if the individual you dealt with at the bank was aware of your fraud.  If you are charged with bank fraud conspiracy, you can be convicted even if you did not personally commit the fraud but knowingly aided someone who did.

This discussion is merely an overview of the basic definition of bank fraud.  There are decades of court decisions interpreting how this statute applies to specific situations, and they sometimes differ from one region of the country to another.  Your attorney can help you identify which court decisions may be helpful or harmful in your case.

Federal prosecutors can and often do bring multiple charges.  In a bank fraud case, charges under 18 U.S.C. § 1344 may be accompanied by charges for money laundering, income tax offenses, aggravated identity theft or wire fraud.

As with any criminal charges, there are many potential defenses to bank fraud and related offenses.  We comment on a couple of the more common ones here.

The most common defense is lack of intent, otherwise known as the “good faith” defense.  As you can see from the statute quoted above, a conviction for bank fraud requires that the malfeasance be done “knowingly.”  The same is true for many related offenses such as wire fraud.  A district judge will instruct the jury in any bank fraud trial that if the government does not prove beyond a reasonable doubt that any fraud was intentional, the jury must find the defendant not guilty.

For example, let’s say you apply for a loan and accidentally include false information.  Perhaps you misstated your income or neglected to list all of your debts.  As a result of your oversight, the bank gives you a loan you would not otherwise have qualified for.  In such a situation, you may be guilty of negligence in filling out your loan documents, but you are not guilty of a crime.

Another possible defense to bank fraud is “materiality.”  In any bank fraud case, the government must prove that any misrepresentations by the defendant were “material” to the bank, meaning they could influence the bank’s decision making.  To go back to our loan example, let’s say you intentionally inflated your income by $5.  In that case (unlike our prior example) you did make an intentional misstatement on your loan application.  However, because no reasonable loan officer would be influenced by a mere $5 difference in income, you are not guilty of bank fraud.

You should discuss the facts of your case with a bank fraud lawyer to determine if these or other defenses apply to your situation.

Given the nature of the offense, individuals who are being investigated for bank fraud will sometimes learn about the investigation before they are charged.  This is because investigators will almost always subpoena records from banks, sometimes leading those banks to shut down the accounts from which the records were subpoenaed.  This can be a frustrating experience, particularly for those who have done nothing wrong.  Often, before bringing charges investigators will contact the target or subject of the investigation and try to arrange an interview, or they may simply show up and start asking questions.  They also sometimes issue subpoenas, requiring individuals or businesses (and not just banks) to turn over records.

Given the high stakes and potential penalties involved, which we cover in more detail below, it is important to proceed with caution.  If you are being investigated for bank fraud, the most prudent first step is to consult with a bank fraud attorney before agreeing to speak with investigations.

As noted above, bank fraud is a felony.  Conviction for bank fraud carries imprisonment of up to 30 years and/or a fine of up to $1 million. In addition, federal prosecutors will often seek forfeiture of assets.  But these are only the maximum penalties, which often tell you little about the jail time that you could realistically face.

As you can see from the above section, a conviction for bank fraud has a wide range of possible punishments.  There is no mandatory minimum sentence so the district judge will have discretion to give you anything from probation to 30 years (effectively a life sentence for some defendants).

Bank fraud defendants are sentenced under guidelines section § 2B1.1, which covers fraud cases.  The amount of financial loss to the bank is the driving factor of this guideline.  In other words, the more money lost as a result of the fraud, the longer the sentence suggested by the guidelines.

Calculating the amount of the loss is not always easy or straightforward.  The government and the defense often disagree on the correct amount.  If the disagreement cannot be resolved, the district judge will decide the guideline amount at the time of sentencing.  The judge may have to take evidence, that is, hear from witnesses and consider other types of evidence, at the sentencing hearing in order to decide the question.

Litigating loss amount in bank fraud cases is extremely important because years of the client’s life may hang in the balance.

If you believe you may be facing bank fraud charges, we can offer you a free consultation to discuss your case with our bank fraud attorneys.

We have represented executives, loan officers, CPA’s, loan processors, and bank customers in connection with federal bank fraud investigations and prosecutions.  Many of these cases were resolved quietly with no charges.

To schedule a free phone consultation, please call our office in Washington, D.C., at 202-386-6920. You can also complete the online contact form.